Customer Service is the corner stone of G.C. Evans and its business practice. David McNamer, Manufacturing Manager of G.C. Evans, is passionate about service, because this manufacturer of cooling, heating and pasteurizing equipment for the food and beverage industry owes its very existence to a total commitment to customer service.

In the late 1980’s, David’s father, Gerald McNamer, purchased the small company, which was in bankruptcy at the time, by assuming the company’s existing debt. Gerald McNamer saw the potential and began restructuring and mending customer relationships to put the business back on track.

Gerald McNamer immediately set out to rectify the customer service issue, and also identified opportunities for using the company’s core competencies in order to expand the product line. Cooling tunnels were added in order to solidify the company’s place in the food processing market, as well as pasteurizers that melded their expertise in both heating and cooling into one integral unit. While virtually every unit manufactured is custom engineered to a specific need, common to all is a commitment to deliver the most responsive customer service possible, from initial design through installation and follow-up service. David McNamer states, “Ten years ago we had 8 competitors in the beverage arena. Today, we have two or three. This is largely due to our insistence on superb customer service. It’s what we demand of ourselves and, it’s what we expect from our suppliers.”

While G.C. Evans is predominately an all-NORD operation, it has not always been that way. As David McNamer explained, “when I joined the company, we were using a NORD competitor’s units exclusively. Then 2008 rolled around while I was in charge of purchasing. Due to the challenging economic conditions that unfolded that year, we had to take a close look at all of our suppliers, including drives. At that same time, Steve Bolton, District Sales Manager from NORD Drivesystems, had been calling and speaking to me about NORD drives. We decided to give them a chance, and were in for some very pleasant surprises. Not only were the units less costly than comparable competitors, but they were really high quality and well-engineered units. What impressed us the most was the level of service we received from NORD. It’s really critical that we get the proper engineering support from our drive supplier, and with NORD, we got that. Steve Bolton brought Jim Alt, a NORD application engineer, to meet with us early in our relationship. We have never had an engineer from our former supplier visit us. And to our delight as we transitioned into becoming 100% NORD, we were always dealing with a single engineering contact within their company.”

G.C. Evans started in the food and beverage industry over 65 years ago manufacturing hot water solution heaters. Over the years the company has grown to also manufacture everything from cooling tunnels and pasteurizers to shell and pallet handling equipment with intentional efforts to provide their customers with the best products and services available. G.C. Evans’ central location in Arkansas allows them to easily serve domestic customers across the country as well as abroad. No job is too large or small for G. C. Evans and their customers always come first.


The Director of Engineering at G. C. Evans, Jason Jones, made some important observations regarding the critical nature of drive dependability, as well as ease of maintenance. “Drives on our pasteurizers have to be, in essence, failure proof. If this pasteurizer stops, our customer loses product, and that simply cannot happen. That’s why we trust NORD drives.”
NORD drives are standard on all G.C. Evans products, including the smaller drives used on conveyor systems which bring product to and from the processing unit. NORD Helical-bevel integral gearmotors with keyed hollow bores are used for their infeed drives, and NORD MINICASE® units drive the dynamic transfer service belts.
The reputation of G.C. Evans’ innovative approach to their NORD-driven infeed and outfeed conveyors has led to the development of a substantial business in “boutique” conveyor systems designed for unique needs.
Great customer service and absolute equipment reliability remain the keys to success at G.C. Evans. “Think about it,” explained Dave McNamer. “If a beverage pasteurizer were to have a drive failure, you’re not only talking about lost product in the unit, but stopping a production line to the tune of potentially hundreds of thousands of dollars per hour. I don’t want to worry about our drives and I don’t want our customers to either. That’s why we choose NORD.”

Focus on the Project

During a site visit, two gigantic pieces of equipment were nearing completion. The first was a cooling tunnel that moves 20,000 jars of jam weighing a total of 50,000 lbs. with a single NORD CLINCHER™ gearmotor operating at a 2500:1 gear ratio and moving at 0.6 RPM. This drive incorporates a multitude of options that are necessary for the sanitation demands of food processing applications, including NSDX3 protective coating, filling with food grade mineral oil, AUTOVENT™ and an oil sight glass.
The second was a pasteurizer intended to pasteurize cans and bottles of fruit juices. The conveyor belt is 16’ wide and 84’ long moving at a pace of 45 minutes of package transit time. Here again, one NORD CLINCHER™ integral gearmotor is used, this one operating at 0.7 RPM. Jason Jones states, “For the pasteurizer, we also have GRIPMAXX™ bushings on the driving roller. This roller is removed every few years to service the bearings and for maintenance. A more traditional key-way-secured bushing may be quite problematic, since fretting and corrosion make it very difficult (and sometimes expensive) to remove. With the GRIPMAXX™, the hollow bore simply collapses on to the shaft. Removal of the shaft is then grab-a-wrench simple.” 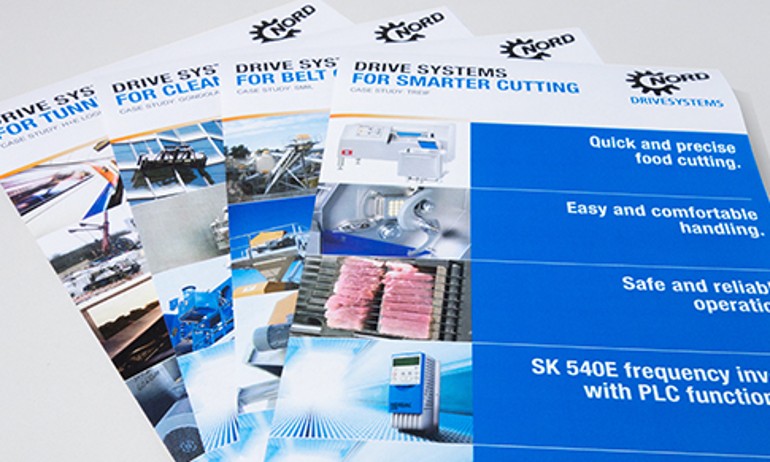