In many gravel pits, stone crushing plants and similar operations, conveyor belts are powered by shaft and belt drives. 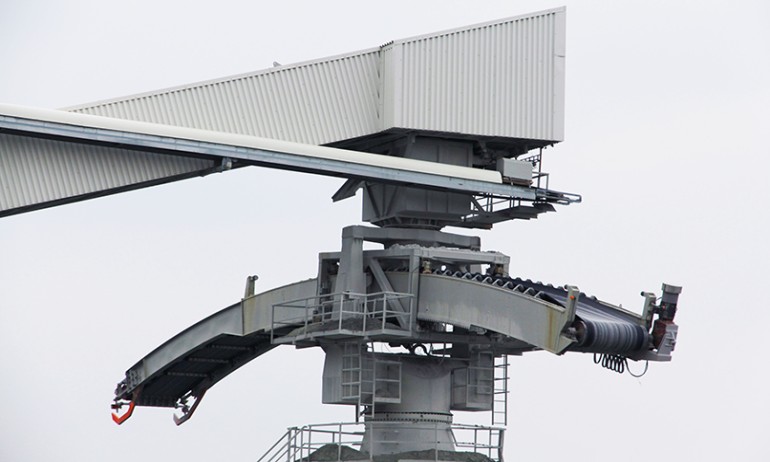 For a long time, this had also been the case at the gravel plant of NorStone AS in Tau, located in the southwest region of Norway. However, recently NorStone, a subsidiary of the German HeidelbergCement AG, decided to change to robust geared motors . This option promised lower investment costs and increased operational reliability, along with better process safety. In addition to that, the operators anticipated an energy consumption reduction thanks to higher efficiency of the new drive systems.

NorStone is Norway’s largest producer of gravel products. The company supplies aggregates for concrete and asphalt, stone cladding for coastal regions, and other special products. Each year, NorStone’s production facilities produce over 6.6 million tons of gravel products of various sorts and qualities. The demand is large, and even with its present annual production capacity of 2.3 million tons of material the Tau plant can scarcely meet the demand. It is therefore all the more important to ensure high availability of the plant and minimize unplanned downtime.

Familiar advantages plus increased reliability with geared motors- Geared motors are not actually new in gravel pits. In the 1980s, they were commonly used for direct actuation. But in subsequent years many plants changed to belt drives because spare parts for these drives were always quickly available, while manufacturers and suppliers of geared motors could not offer equally flexible stocks of spare parts. For this reason the conveyor belts in the gravel plant at Tau had also been powered by belt drives until recently. A practical advantage of this solution was that most of the belts were readily accessible and could easily be exchanged if necessary. However, operational reliability was inadequate, and breakdowns had major negative consequences and side effects. Thanks to improvements in the supply situation, the former solution with its proven technical benefits has again become attractive for many plant operators. “We have found that service and spare parts for geared motors are now available to us very quickly. We keep some parts in stock ourselves, and for all of the rest we have complete trust in NORD DRIVESYSTEMS as a supplier”, says Ivar Ullestad, Maintenance Manager at Tau, explaining the switch. “Now we can use all the advantages of drive solutions based on geared motors . In particular, direct actuation increases reliability, which means less downtime and therefore less production time loss. Another important aspect is that less maintenance is required. In addition to reducing maintenance costs, this increases safety in the plant”, Ullestad adds.

Measurably less wear than with shafts and belts- In matters such as these the working conditions should be seriously considered. “You have to bear in mind that we work outdoors all year round. Most of the conveyor belt drives are mounted out in the open and unprotected. Due to the harsh weather conditions in the west of Norway, with wind, rain, and sleet, as well as the dusty and rather unpleasant environment at the site, we try to minimize repair and maintenance times for our maintenance staff.” The Tau plant runs in shifts, seven days a week, 24 hours a day. The 168 production hours include 16 hours of scheduled maintenance. The plant is only shut down for the winter break. That opportunity is used for two to three weeks annual maintenance inspection. The new geared motors have contributed to a distinct increase in reliability by approximately 4.5 percent in the last three years. “We are very satisfied with this trend. Switching from shaft and belt drives to geared motors from NORD DRIVESYSTEMS, firstly, we eliminate belt wear, which used to be a considerable factor. Secondly, water and dust cannot enter the drive mechanism. The advantages of compact, robust geared motor units are plain to see. The decision in favor of a switch has thus been tested and proven right”, concludes Per Thu, Production Manager of the NorStone plant. The refurbishment has not only increased reliability and saved time and money through reduced maintenance activities, but the investment costs for purchasing new gear units also turned out to be lower than those for maintaining the old technology, which would have included replacing complete packages consisting of a shaft-type gear unit, belt pulleys, belts, a shed, a belt cover, and a motor . As a series of periodic gear unit replacements was already in the works, a comprehensive switch from shaft and belt drives to direct drive units was the logical decision for Ullestad. He is currently working to standardize drive components. “While we gradually exchange the conveyor belt drives, we standardize characteristics such as motor size, shaft size, and drum diameter in order to limit diversity and thereby facilitate maintenance, stock management, and service. We also implement backup solutions, which involve among other things keeping components in stock ourselves”, says the maintenance manager.