The large international airport in Hamburg underwent a systematic modernization and capacity expansion in the past few years. Terminal 1 is entirely new and the conveyor technology in Terminal 2 has been completely restructured and brought up to the state of the art. A new Airport Plaza closes the gap between the two terminals. In view of an increased number of passengers, the efficient organization of baggage transport and storage is essential.

Hence, the modernization project included the construction of an interlinked baggage handling system, which serves all three terminals and can handle and sort up to 8,700 items of baggage per hour. In view of the large volume to be conveyed, breakdowns must be absolutely avoided. At the same time, the transport technology must be up to scratch, as it is connected to a computerized logistics system, which can at all times precisely locate each item of baggage. Therefore, intelligent, high-performance, and highly flexible drive technology is needed. NORD DRIVESYSTEMS not only implemented a reliable system meeting these demands, but also satisfies the customer’s wishes with regard to service and maintenance.

Aviation security requires that passengers and baggage are checked before travel. At international airports, the trend is to transfer baggage checking behind the scenes in order to ensure rapid processing which is as much as possible automated. The interlinked Hamburg system integrates all control levels. The extremely reliable, low-wear transport technology provides high availability. Standstill times and operating costs have been minimized. A high-performance track and trace system keeps track of all pieces of baggage. Optimized space utilization ensures e.g. that early baggage, i.e. baggage which is checked in the previous evening, can be quickly fed in for further processing without additional labor. Tracking, tracing, and automatic sorting enable economic and punctual processing, even of large quantities of baggage.

At check-in, the baggage is loaded onto a first conveyor belt, where it is weighed and labeled. Behind a total of 108 check-in desks, a common conveyor belt collects it for sorting. Unless baggage screening issues a warning, passengers only see their baggage again at the destination airport. Out of sight of the passengers, identification and a multi-stage, largely automatic security check ensue. First of all, the baggage labels from check-in are scanned and archived for further tracking. Then, all baggage without exception is subjected to a fully automatic security check, as only baggage which is categorized as completely safe may be loaded onto the aircraft.

Baggage which passes through the control levels without problems is separated, via holding sections and acceleration belts, onto sorter carousels with tipping trays. To precisely position each item of baggage onto a free tipping tray, the acceleration belts are linked with the system intelligence. At this point the system, which is equipped with more than 1,000 sensors, knows precisely which tipping tray holds which item of baggage. At the required time, the respective tipping tray is emptied onto a loading table for the correct flight; the ground staff then packs the baggage into containers or transport trolleys for aircraft loading. 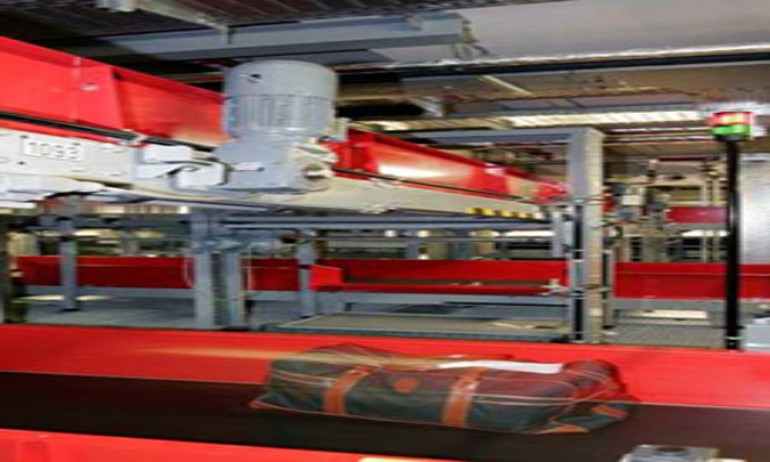 Requirements and challenges: Drive technology in a demanding track and trace architecture
Hamburg Airport handles nine million items of baggage every year. For the baggage handling staff, the reliability of the conveyor system and the prevention of faults have highest priority: the breakdown of even a single component of the system would result in a backlog and unacceptable delays.
The baggage handling system employs several kilometers of conveyor belts for combining, feeding, holding, and sorting baggage, which have to manage horizontal, upward, and downward transportation. To match the flexible conveyor system, the drive concept was designed for minimum wiring and installation effort. Plug-in integrated NORD trio SK 300E drive units, which can be quickly and simply replaced if maintenance is required, precisely accelerate and decelerate the conveyors. The frequency inverter is mounted directly on the motor terminal box. A Profibus DP connection allows for all control and diagnostic functions to be carried out remotely. In addition, the inverter is equipped with controls for the manual adaptation of direction and speed.

Without interrupting operation: New construction and partial modernization with a new drive supplier

The recent expansion and modernization have equipped Hamburg Airport for the increasing numbers of passengers and quantities of baggage. At present, the airport handles about fifteen million passengers per year. The project included that a single interlinked baggage conveyor system be implemented for the first time. In 2005, the conveyor system in Terminal 2 was exchanged and modernized during full operation. Three years later, the parallel conveyor architectures were linked to form a single system. All baggage security checks are now carried out in the basement. Thus, an innovative, flexible, and astonishingly efficient intermediate storage system was implemented. At the same time, handling of transfer baggage between airlines was considerably simplified.

Roger Mest, Electrical Engineering Operations Manager with Real Estate Maintenance Hamburg GmbH, a subsidiary of Hamburg Airport, still considers the conversion during operation to be a remarkable feat for all concerned. NORD did a very good job to enable that. The fact that Hamburg Airport is near the NORD headquarters can be seen as a coincidence. NORD has already equipped many airports throughout the world, including Manchester, Liverpool, and Birmingham, as well as Ottawa, Johannesburg, and Taipei. Mest sums up: “We decided for NORD as an experienced provider of airport equipment. That the know-how comes from our region is a bonus. It was important for us to have a dependable partner.” In the course of the modernization, the airport company changed its drive supplier. Mest: “With the large amount to be handled, we cannot afford breakdowns of the conveyor system. Before the conversion we repeatedly had problems with the drive technology, which sometimes annoyed us. Although there has been a great increase in the number of drive units, there are rarely any failures now, and most of them can be quickly remedied on site. We are very satisfied with the installed technology. Above all, we know that we can handle the increased load and that flights need not be delayed due to failures of the system."